With Facebook admitting that there are 270 million profiles that are fakes or clones, it doesn’t seem that Facebook wants to take them down. In November 2017 Facebook execs pledged to the U.S. Senate Intelligence Committee that they would take down the fakes.

Colin Stretch Facebook’s general counsel stated that FB was hiring 20,000 reviewers and using artificial intelligence to help spot these scammers on their platform.

Hundreds of profiles are reported daily and Facebook’s review team seems to be on coffee break and  AI doesn’t seem to be working.  Endless fake after fake gets cleared and FB states they don’t violate their community standards.  It seems that if the name (fake or not) matches the profile that was registered in it gets cleared. If there is interaction on the wall the profile is cleared. But my question is “why isn’t FB looking beyond the superficial? It’s not too hard to do. Let’s take a look at two profiles David Bob Martin and Anderson L. Gran. 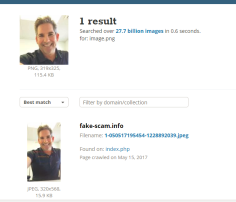 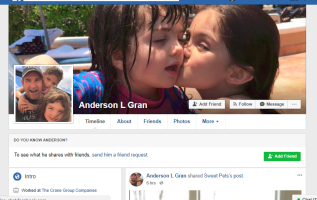 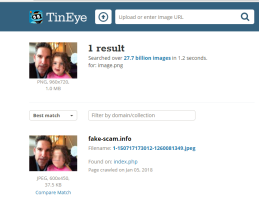 See anything familiar between the two profiles? They are pictures of the same man. And the reverse image search site tineye states the photos have shown up on scammer websites.  I always search the groups and likes of the profiles as that can reveal more about the profile. Look at the photos posted. If a profile has little to no photos it is another sign that the profile is a fake.  And as an aside, both profiles expose pictures of innocent children as well.

Then there are the fake profiles that steal pictures of well known people like this one.

A friend of mine received a friend request from Dragan Sutanovac.  His profile stated that he is a General for the US Army stationed in Afghanistan. How romantic to be contacted by a lonely soldier fighting for peace in this world of ours.  Problem is Dragan Sutanovac is the current leader of the Serbian Democratic Party and former Minister of Defence of Serbia.  I really don’t think he is now living in Afghanistan and working for the Americans. There are actually 30 profiles under the name Dragon Sutanovac or variations thereof. And many of them are fakes too. 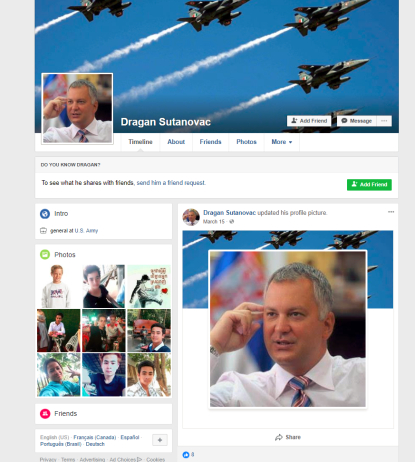 The hilarious thing about this profile is truly what a mess it is and Facebook doesn’t remove it.  Take a look at the other profile pictures:

Doesn’t really resemble the U.S. Army General in the first photo does it?  All of the comments are in Vietnamese or Cambodian and a favourite TV show is Cambodian Idol.  Always take a look through all the posts on the wall as well as any likes and groups the individual may belong to. They are often telling.

Facebook does not provide many options for reporting profiles. If you report a profile you get only a few options to state why you’ve reported it.  Here are the first two screens you get when reporting, 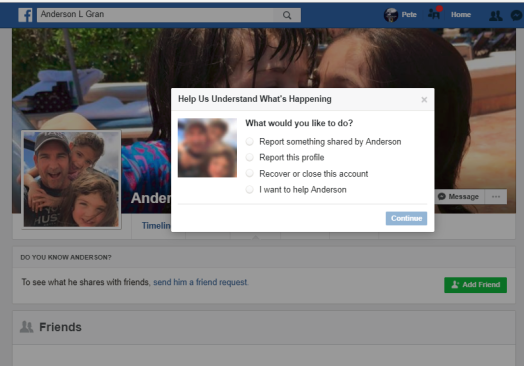 If you merely click on “This is a fake profile” it seems to get less traction from Facebook than if you click on “They’re using a different name than they use in everyday life.”  So although Facebook made promises to the Senate Intelligence Committe they have done little to rid the platform of these menacing criminals lurking on the site.  Complaints to Facebook fall into a black hole and you really wonder how anything is assessed within the platform. If they rely on users to police the site and report unusual behaviour where is Mark Zukerberg’s committment to get rid of these fake profiles?

One of my friends is head of Risk Management for a Bank in Rhode Island and she told me the overwhelming majority of losses to banking clients are online romance scams. Most victims are middle aged women and while men can be scammed as well the majority of victims are female.  And the tough part of warning anyone to these types of scams is that they totally believe the scammer is legit and in love. But the only thing they love is the thought of your money.  Could there be a point of culpibility for Facebook or other online platforms in some of these scams?

The FBI reported in 2016 that 15,000 instances of romance scams were reported with losses of 230 million.  They actually estimate that true losses are much higher with only 15 percent of victims reporting the scam.  Many of these scams are run by international crime groups with several of them based out of Nigeria.  Interpol states that some of the proceeds from these scams have gone on to fund terrorist groups such as Boko Haram.